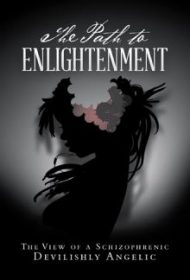 In The Path to Enlightenment: The View of a Schizophrenic, pseudonymous author Devilishly Angelic describes her experiences growing up with auditory and visual hallucinations.

The author is now a therapist and owner of a social service agency that helps clients “manage symptoms ranging from schizophrenia to substance abuse,” according to the book’s back cover. African-American, she describes growing up in the Chicago projects with a mother who was both distant and overprotective; she kept the kids inside and forbid them playtime, but didn’t hug them or offer encouragement. The author describes seeing, at age eight or nine, a cloud in her bedroom that began to form a human shape. After that incident, she started hearing her name called and seeing the cartoon eyes on a pair of slippers looking back at her—and has continued to see and hear things others don’t.

Most chapters are titled with diagnostic terminology (i.e. “Post-Traumatic Stress Disorder” and “Specific Learning Disorder, Psychotic Disorder”) and offer the continued narrative of her journey. Several end with passages titled “Brain Wave of Thought,” in which she reflects on what may have caused the symptoms she suffered and, sometimes, on what would have been the best treatment for such situations.

While the latter can be distracting, the narrative of the author’s life is dramatic, owing to her ability to build tension in a scene. Unfortunately, the book is rife with contradictions. For example, the author is diagnosed with schizophrenia and even includes the word in her title but says she rejects the diagnosis. She mentions being discharged from the military over her mental state but declines to elaborate out of concern for her safety, apparently forgetting the book is written with a pseudonym.

It’s uplifting to know the author has overcome serious challenges and managed to thrive, but such inconsistencies undermine her credibility as a narrator. While The Path to Enlightenment is hard to put down, its usefulness to others in crisis may be limited.