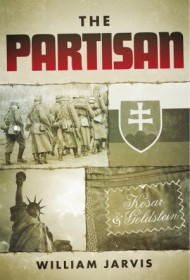 Framed as the reminiscences of an elderly New Yorker sharing his long-hidden past with his children, the main narrative opens in Czechoslovakia on the eve of Nazi Germany’s seizure of the nation’s Sudetenland region. Author William Jarvis does a nice job of conveying the necessary historical background by having brutal Third Reich ambassador Max Hessler explain to a cringing, quisling priest that the Nazis intend to dominate Slovakia as well.

Then the author introduces Stefan and Patrik Kosar, brothers whose very different natures shape their responses to Slovakia’s dilemma. Their father Tomas, a Slovak nationalist who rejects collaboration, is arrested and dies in jail; their sister Matilda is raped by the loathsome Viktor Grantz, a Nazi propagandist spreading poison in their hometown of Bratolva. Hot-headed Patrik flees to join the partisan rebellion. Stefan struggles to keep the family textile mill going with the help of Maria, adopted daughter of Tomas’s Jewish partner Mannie Goldstein, who is trying to re-establish the business in New York after the Nazis loot their bank accounts.

Stefan, who can be both snobbish and indecisive, clashes frequently with clever, assertive Maria about how to best outmaneuver the Nazis, but as the war progresses they are drawn together by their mutual determination to preserve their heritage.

Jarvis explores all his characters with sensitivity and insight, providing a slam-bang climax that leaves Stefan with guilt he is still trying to expiate years later, as the narrative returns to the 1990s and he is accused of collaborating during the war. A couple of sudden but reasonably plausible plot twists remind readers that heroism comes in many varieties.

This is exciting, well-written fiction with a moral backbone, an engrossing and provocative read from the first page to the last.