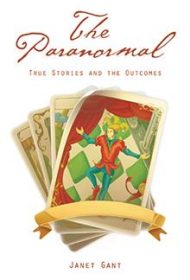 This nonfiction examination of divination—using supernatural means to foretell the future and solve problems of the past or present—adopts a serious, although optimistic, tone, including many stories that involve communicating with the dead to resolve unfinished business.

Divided into two parts, the book begins by explaining paranormal communication, including various types of readings: psychics, tarot cards, astrology, numerology, palmistry, tea leaves, face analysis, and dowsing (using tools such as a pendulum), followed by methods of communicating with the dead, such as spiritualism, mediums, clairvoyants, séances, and ghosts.

The second part describes actual psychic readings the author and 40 other people received. The “true stories” referenced in the subtitle offer each person’s personal background (sometimes withheld by request) and the readings, many of which were transcribed from tape recordings. Others are paraphrased or shortened to a vague sentence or two, such as “You are going to travel overseas, and you will be away a very long time.”

Passages labeled “Outcome” summarize the accuracy of the readings. The author states twice (back cover and acknowledgements) that her book will convince non-believers in the validity of the supernatural, so it’s not surprising these focus mostly on predictions that came true. Because outcomes may be influenced by biases, faulty memories, changed fates caused by altered behaviors, and more, the evidence is far from scientific.

Other problems include non-traditional book formatting (the introduction is contained within chapter one; bibliography lacks required information; no conclusion is provided), occasional errors in tense and grammar (“Up to now, most books are written about the life of one particular medium and their experience”), chapter groupings that seem random, inconsistency in each story’s presentation, and occasional shifts in focus.

Despite the author’s earnest intentions to convert non-believers, The Paranormal can be a bit of a jumble to read and will best serve people who already accept that divination is true and appreciate the reassurance this text offers.