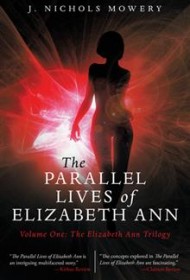 This paranormal mystery, intended as volume one in a trilogy, explores the lives of three women with the same name, parents, childhood and home. Living simultaneously in three separate dimensions, their lives become intertwined when personal crises and the summer solstice bring them together.

The story begins with a prologue describing James Anderson’s cabin on Redcliff Beach in Washington State. While constructing the site, he notices a huge, glowing agate rock in the cliffs and takes it home. As instructed telepathically by the beautiful translucent stone, James sets it into the concrete floor. The cabin, cliffs and stone are essential elements when his daughter, Elizabeth Ann, endures a trauma at age 14 and splits into three separate selves with parallel lives in different dimensions.

Many years later, Liz, Beth and Eliza again endure traumas – all losing loved ones on the first day of June. Previously unaware of each other, their circumstances create an energy shift allowing them to physically interact by crossing dimensions. The lives of Liz (whose mysterious husband dies in a plane crash), Beth (whose lesbian lover dies from cancer) and Eliza (who murders her ex-husband and his lover) intersect as dimensions collide, the dead visit the living and another magical rock appears in the cliffs.

Though well-plotted with an intriguing premise, the book has numerous problems detracting from the overall effect. The women talk to themselves out loud as an obvious — and jarring — means of delivering backstory. Also, there are abrupt, illogical changes in emotion: One minute an Elizabeth approaches a man for comfort and the next slaps him. Punctuation, spelling and other errors appear on nearly every page, including “My husband died the first of June first” and “both parents laughed but realized their oldest daughter was going to need closer watching then they’d supposed.”

Although unpolished, the story has promise, and even as is may satisfy paranormal mystery readers interested in parallel lives.