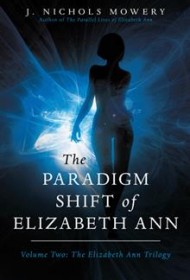 This second installment of a trilogy and sequel to J. Nichols Mowery’s debut novel (2014’s The Parallel Lives of Elizabeth Ann) continues the strange story of three women who are all essentially the same person living parallel lives in parallel realities.

After meeting each other in the first novel and sharing in three different but heartrending tragedies, the trio of Elizabeth Ann Andersons—Liz Day, Beth Anderson, and Eliza Staples—continue to explore the bizarre phenomenon that allows them to cross over into one another’s dimensions. The golden agate set in the floor of the cabin built by their father along a stretch of coastline in Washington State seems to be a conduit of sorts, and the three Elizabeths have met around the adjoined kitchen table on a daily basis.

As their lives unfold along different paths—Liz begins falling for a handsome veterinarian; Beth continues to deal with a psychotic sister who was institutionalized after trying to kill her; and Eliza loses her sister and nieces in a plane crash—there are uncanny parallels as well. All three of them have acquired animal “familiars,” oddly sentient creatures that are much more than they seem. The animals lead the women to wondrous new discoveries, not the least of which is the existence of even more Elizabeths in slightly altered realities.

While the premise is absolutely fascinating and the unfolding storyline ambitious, the novel is hampered by poor editing. There are numerous grammatical errors and, at points, the story seems rushed and the writing unpolished. In one sequence, for example, in the span of a few pages the word “young” is used 31 times. It’s unfortunate because the majority of the novel is well written and powered by a fluid and focused narrative.

A closer edit would improve the novel’s presentation. That aside, the uniqueness of the story and the strength of the various Elizabeths make this a generally satisfying and thought-provoking read.