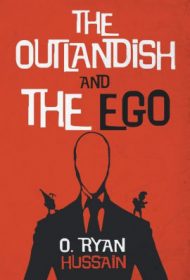 In a time in America that feels rather mad, novelist O. Ryan Hussain offers an over-the-top, pitch-black satire billed as “political erotica.”

Our main character is quite mad himself. Germophobic and schizophrenic, Samuel Salimone is imprisoned in a mental institution, defying doctor’s orders by refusing to take his meds and other behaviors and living in abject fear of “the little men,” which Samuel believes are gnomes chasing him. But Samuel soon escapes.

Cut to the White House where a petulant, openly racist president is just months away from his potential re-election. He’s surrounded by gun-toting toadies who are only identified by their titles: a viciously competitive Aide, the Press Secretary who calls him a “lazy idiot,” and his Campaign Manager, among others.

As the administration hurtles towards a self-concocted war with Argentina to score political points, these two anarchic plots hurtle towards each other as well.

This is an eccentric book: cartoonish, vulgar and rife with lewd humor. But the lampoon also crackles with an edgy energy that recalls similarly unorthodox novels like One Flew Over the Cuckoo’s Nest or A Confederacy of Dunces. Almost all the characters are unhinged of course, but Hussain’s smirking censure of the political struggle for power is particularly caustic. Through Samuel’s altered worldview, the novel suggests that we all must be a little mad to accept the outlandishness of the world around us.

As both a condemnation of our current political divide and a quest for true freedom from the vagaries of our own minds, this is a wild and largely satisfying ride.