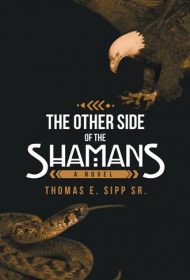 The novel’s first part revolves around Walking Horse, a Ho-Chunk shaman living in Wisconsin Territory in the early 1800s, and his son Thomas as they struggle with the white man’s seemingly unstoppable encroachment. This section is richly described, and the author’s portrayal of the shaman is insightful and meticulous. Similarly, Walking Horse’s relationship with the white settler Rebekah, who eventually becomes his wife, is emotionally intense and engaging, as is his (and his son’s) relationship with the Weyekins, deceased friends and family members from the spirit world. This segment is a powerfully moving work of shamanistic fiction.

The second segment focuses on Father Daniel Seraphim, a Catholic priest in the latter 20th century fighting an evil secret cadre within the Church. This part lacks the thematic power of the first. Whereas Walking Horse and Thomas are fully realized characters, Daniel seems almost a stereotype: the good priest battling evil within the Church. Daniel attempts to stop this element from rising to power and irrevocably changing the world, a storyline that isn’t as deep, or believable, as the first.

Oddly, the two parts seem mostly distinct, only loosely related by the fact that Walking Horse is Daniel’s ancestor. The first part could have easily been its own novel, without the priest’s narrative.

The novel has other flaws: The sex scenes—there are many, particularly between the shaman and his wife, and a church leader and young boys—are gratuitous and unnecessarily graphic (“He thrust himself back and forth, moving in and out of her moist orifice…”); and the ultimate conclusion is disappointing as the plot elements of the larger story aren’t resolved in any way.

In sum, this mystical look at the world through the eyes of contemplative characters offers some rewards, but revision to strengthen the second narrative and improve the conclusion could greatly enhance the novel overall.