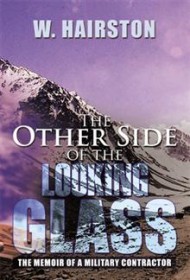 After W. Hairston left a 20-year career in the U.S. Navy during 2008, he received a job offer from a private-sector military contractor with ties to the federal government to do highly paid, high-risk work in war zones such as Iraq and Afghanistan. Despite Hairston’s misgivings, he said yes, apparently lured by the money and a sense of adventure. This book details his experiences at that time.

A brief preface signals readers that Hairston regretted his decision, having transformed from a mostly contented Navy man to a bitter, even misanthropic employee performing electrical work for a series of gigantic military contractors. He resented the lack of support he and fellow employees received when their physical safety was at stake. He resented what he came to view as the “exploitation” of the U.S. labor force, as well as contract employees from other nations. He resented high-handed supervisors employed by the contractors.

His memoir is an expose of waste, fraud and abuse, the keystones of investigative journalism. Unfortunately, Hairston lacks the training and the mindset of the best investigative journalists, indicting his employers through thinly documented bile rather than verifiable evidence. There is little doubt that his unpleasant experiences overseas during a three-year stretch are valid, and were possibly nearly universal among employees of contractors such as Kellogg Brown and Root and its predecessor firm Halliburton. The problem is that Hairston fails to deliver the bigger picture beyond his limited vision.

The angry tone is sometimes effective in maintaining reader interest. Unfortunately, though, the book lacks the narrative drive to string together these personal experiences in a compelling manner. The author’s heavy use of acronyms and other jargon, plus the text’s poor sentence structure and grammar, harm readability as well. The result is a book that may engage those who already have a deep interest in the subject, but is less likely to hold the attention of others.