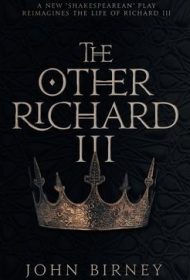 With The Other Richard III, John Birney crafts an ambitious and creative retelling of Shakespeare’s Richard III.

Whereas Shakespeare’s Richard is an archetype of corruption—a manipulative tyrant who becomes king through a series of murders— Birney takes an entirely different tack. Noting that Shakespeare’s character is “impossible to reconcile with historical fact,” he presents Richard as a tragic hero, a man trapped between the machinations of his brothers, the Duke of Clarence and Edward IV, king of England.

“I strove to stay faithful to what is known to be true about Richard…and resolve what is unknown—those great mysteries in his life—in ways original yet still consistent with that history,” explains Birney in the book’s Preface.

Though not perfect, Birney’s Richard is a compelling protagonist, loyal and empathetic. Other characters drive the villainous acts attributed to him in Shakespeare’s original, such as the murders of Edward’s children and Clarence. When Richard loses his son, and then his wife, readers empathize with his plight as a man devastated and alone.

The author mimics the Elizabethan language remarkably well. For example, Gloucester asks Edward, “But wherefore now use such severity?/ When verily he did engage at arms/ For to unking thy grace…” The writing is witty and metaphorical, playing upon Shakespeare’s style. For instance, a character asks, “Are we not all players on a single stage?” which harkens back to a monologue in Shakespeare’s As You Like It.

Birney accomplishes an incredibly difficult task: creating a realistic Elizabethan-style tragedy with accurate stage directions. This play could easily be performed on stage. He also employs a clever literary device by footnoting his play the way a scholar would footnote an actual Elizabethan drama. At first, readers may find this disorienting, but ultimately it adds to the verisimilitude of the work.

Birney creates a remarkable retelling of Richard III, delivering an intriguing and bold take on a masterpiece of the Bard’s canon.