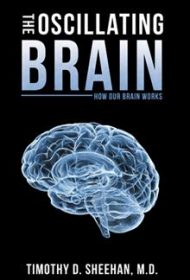 When an author proclaims that his book is the first to explain how the human brain works, he sets an incredibly high bar. Timothy D. Sheehan tackles this challenge in his ambitious work that combines his medical training, clinical experience, and psychiatric observations of human behavior, along with his innate interest in complex systems.

The book begins with an overview of basic brain anatomy, then proceeds to a deep dive into the brain’s physical structure and function, down to the cellular level. In later chapters, Sheehan approaches the psychosocial aspects of brain functionality, explaining how we process concepts such as self and logic. Finally, he offers his thesis that the brain is a complex system dependent upon the physical as well as the emotional.

Sheehan has an obvious mastery of his material and notes that his work is “for anyone interested in human behavior and brain function.” What immediately strikes the reader, however, is the material’s density, as in: “Neurotransmitters are relatively simple chemicals released by neurons at tips of their axons. Neurotransmitters bridge the narrow gap (referred to as a synapse) that separates the axon tip of one neuron from the dendrites (short extensions) of the next neuron…” General readers are likely to feel overwhelmed by the string of unfamiliar terms and facts. It isn’t until later in the book that the author relies more heavily on the use of examples and metaphors as explanatory methods.

Disappointingly, those who persevere will find that the author’s thesis is more anti-climactic than a-ha, since it has been the subject of previous scientific studies. The book includes a comprehensive bibliography; however, the addition of a glossary would also be welcome.

If there’s groundbreaking material here, it is lost in the dense, repetitive text. Those who have a working knowledge of neuroscience may find this readable, but anyone seeking either an introductory or innovative offering may wish to look elsewhere.