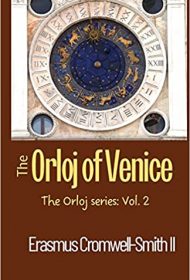 In The Orloj of Venice, the second in Erasmus Cromwell-Smith II’s imaginative young adult series, a beloved teacher captivates his university students, and others listening to his lectures telecast around the world, with the magical, cathartic events of his past and the life lessons they imparted.

This time, the professor reveals adventures that occurred when he was 13, inside the alternate realm of the astrological clock known as “The Orloj” in Venice’s San Marco Square. A year after the first book’s other-worldly odyssey in Prague, young Erasmus rejoins the five harlequin-costumed youngsters of the previous book to continue their quest to become “young wizards.” They are guided by The Orloj in human form, his two sons, and an eclectic group of transformative antiquarians also encountered previously.

Within this ancient city marked by waterways and gondolas, beauty and romance, Cromwell-Smith II presents a visually enticing storyline where the inquisitive young apprentices must master the virtues of honesty, loyalty, and forgiveness, and recognize the vices of deceit, betrayal, and grudges. With lessons learned, they gather clues and new magical powers to help them cross to the island of St. Giorgio Maggiore Church, where they’ll receive their official wizard credentials.

As with the series’ first book, the author creates an atmosphere reminiscent of Alice in Wonderland, where nothing is as it seems. On their journey, the harlequins encounter an evil dwarf, magic portals, prison chambers, lavish banquet hall paintings that come alive with ghostly levitating figures, and more.

While this story isn’t quite as immersive as the first, it still entertains. It’s unfortunate that only the opening and closing chapters showcase the elder Erasmus, however; more evidence of how his past lessons impacted his life would have been welcome. The text also requires proofreading, as it’s replete with missed spacing, letters, and words.

Ultimately, the tale will likely keep readers interested enough to move on to book three in the series, The Orloj of Paris.