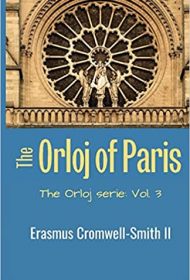 In part three of Erasmus Cromwell-Smith II’s fantastical Orloj series, a favorite eccentric professor, known for sharing his remarkable lecture series with students around the globe, once again takes readers along on his “magical journey down memory lane.”

The beloved pedagogue describes his adventurous youth at age 14 in and around the city of Paris with five fellow wizards as they attempt to hone their magical craft. While visiting several astrological clocks in France, the teens must also learn about specific human flaws and virtues to earn clues and help them get a damaged clock in Lyon repaired. Their final destination, the Eiffel Tower, brings challenges that, if surmounted, will allow them to become Master Wizards.

Throughout their odyssey, as they travel by train, step through translucent portals, and climb an elusive staircase to the clouds, the group seeks advice from the ancient Orloj, his diminutive sons, and the knowledgeable shape-shifting antiquarians they’ve come to rely on.

While the storyline is marked by imagination, it’s smartly rounded out by the added dimension of art, history, and invention. In addition to expected backdrops like Notre-Dame, the Louvre, and the Arc D’ Triumph, Cromwell-Smith introduces several real-life characters who made important world contributions: Samuel Morse (Morse Code); Louis Pasteur (pasteurization); French Impressionist painters. Such inclusions bring a delightfully informative perspective to the pages.

Intermittent italicized paragraphs remind readers of dark hidden forces waiting to exact revenge on young Erasmus and his cohorts, including high winds, dark fog, lightning bolts, and the return of the evil dwarf from the previous adventure. Cromwell-Smith also transports these adolescent wizards back in time to Paris during the mask-wearing era of the Spanish Influenza, a seeming nod to contemporary pandemic concerns.

Although the book could use some proofreading to correct a handful of errors, the unique combination of wizarding and well-chosen artful and historic additions should broaden the series’ readership and entertain an intrepid audience of both young and old.