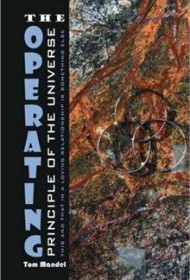 Flip a coin and what do you get? There are only two possibilities, because a coin has just two sides, right? According to Thomas M. Mandel, that’s a very limited way of looking at it. In The Operating Principle of the Universe, Mandel explains how he came to believe in a third side to every coin: in addition to “this side and that side,” he says, there is “the inside that holds all coins together.”

Mandel’s insight came to him after examining an art exhibit that resembled a black box on the outside, yet held movement, light and sound on the inside. In his book, Mandel recounts this epiphany and explains the unusual philosophical and scientific principle he feels he discovered that day at the Chicago Museum of Science and Industry.

In a nutshell, Mendel’s principle offers a way to represent everything that exists by emphasizing the process, or relationship, between two things. He boldly proclaims that his discovery is exquisitely complex and yet elegantly simple. He offers diagrams to illustrate his ideas and quotations from thinkers as varied as Ludwig von Bertalanffy and Fritjof Capra. Mandel’s repeated attempts to defend his position have the opposite of their intended effect, however, as they suffer from a circular logic: he seems to be saying that
everything can be explained as a system if only you use a system to explain everything.

Mandel’s writing runs in circles as well; he restates his premise many times in nearly identical language and repeats illustrative anecdotes. The reproduction of his 1994 conference paper rehashes the topic yet again. Repetition aside, The Operating Principle of the Universe presents a perspective that might make an interesting addition to a college philosophy course, though its presentation here falls short of the mark.