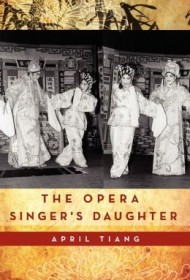 Like a Chinese opera, The Opera Singer’s Daughter has a melodramatic air about it, as its women struggle to survive life. It describes how they work hard to earn money and suffer for romantic love.

Oddly, the story is not about an opera singer’s daughter, though one is mentioned briefly mid-book. The title may be symbolic, as author April Tiang begins and ends her work with a paragraph about a popular Chinese opera; it begins: “The opera singer wailed loudly as she pranced around the stage.”

The first half of the book is a compelling account of a woman (perhaps Tiang?), whose husband has turned abusive. The woman is referred to as “she” throughout. The woman’s story ends on page 74, and without any forewarning, an entirely new section begins. The sections are separated by an unattributed poem. “We remember the men in our lives by the sex we have,” reads the first line of this ode to intimacy.

The new section is about “Gigi,” and the stories she heard about her maternal lineage. “Gigi” was raised by her grandmother, Por, who, like all the people in this book, migrated from southern China to Malaysia for work. Most of the stories related are interesting—for instance, Por’s former husband sold some of her children when she wasn’t looking—but keeping track of all the characters and places takes some effort.

Readers are likely to bristle at the book’s lack of identity (is it a memoir? fiction?; it’s never clear). Several poems are included, but their authorship is puzzling, as they are unattributed. In all, the book makes for a perplexing reading experience, which is unfortunate, because Tiang demonstrates in the first section that she can write suspensefully. While The Opera Singer’s Daughter is likely to have difficulty finding an audience among general readers, it could possibly be useful in a women’s studies or Chinese history course, for its historical interest.