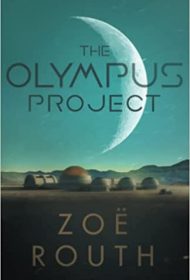 The Olympus Project, the first of Zoe Routh’s dystopian series, combines examples of team leadership with a story of the world in crisis.

Routh, a professional corporate team builder, wrote Olympus to see “if fiction might be a more powerful way to explore important leadership themes.” As her plot unfolds, she shares her team leadership problem-solving techniques through her characters.

In this story, Earth is ravaged by climate change. Human communities survive in self-contained environments. When Gaia Enterprises, a manufacturer of human habitats, has an opportunity to colonize the moon, it invites the world’s most brilliant habitat designers to participate in a team-building competition. The winning team will build the first lunar settlement.

The story’s first two parts focus on the recruitment and vetting process of the contestants, who face numerous challenges and conflicts: for example, managing a virtual reality crash to see how they handle a sudden emergency as a team; navigating across rugged mountain terrain; and working their way through a cavern. The story’s last part involves the winning team building and living in a habitat on a simulated moon.

Routh delivers skillful storytelling and vivid descriptions. For example, when a participant fearful of heights is tasked to virtually climb a ship’s mast, Routh writes: “The sea air whipped around him. The sway of the pole grew more exaggerated. Jonas felt his muscles strain to keep his balance on the steps. This giant pendulum action heaved him to and fro.”

There are also a few problems. Routh takes so much time developing the book’s characters — nearly 20 are vital to the story — and setting the stage for the simulated lunar landscape, that readers will be disappointed to learn that the winning team won’t start work on the real-life moon in this book. Additionally, the plethora of team-building information can feel tedious.

Still, the novel delivers a well-written story about people cooperating to achieve a goal. Many science fiction readers will anticipate the sequel.