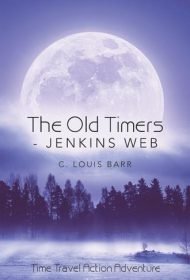 Barr’s ambitious time travel adventure revolves around two brothers, Carl and Roy Mosley, who must figure out how—and why—they were transported from their home in 2012 Cedar Rapids, Iowa, to more than four decades into the future.

After a few months of living in 2056—an almost post-apocalyptic future where world wars involving Korea have irrevocably altered the Iowan landscape to include giant mutant creatures—the brothers have figured out that their future counterparts (the Old Timers, Old Carl and Old Roy) had a hand in their strange abduction. As they try to figure out why they’ve been sent to the future, they must also find a way to travel back in time to save their wives, who could be in grave danger. An interesting subplot is Carl’s mysterious bond with a woman (who may not be human) who has visited him throughout his life and connected intimately with him on a sexual level.

Another significant issue is the overly intricate and convoluted backstory. Readers never fully understand the history and relationship between the brothers, the Old Timers, and the evil Boris Tuttle Simonov. Narrative clarity is murky at best when it comes to the backstory, and the primary plot is complicated by clones of characters using different names.

Lastly, the sex scenes are not only gratuitous but poorly written. “…[Teresa] hoisted my Jake up to divide the slippery lips of her Cottage as she slowly sat lower and pulled my Jake deeper inside her waiting wet Nest.”

Sadly, the cumulative effect of these narrative flaws makes for a difficult read, although the author should be commended for attempting to write such a challenging storyline.