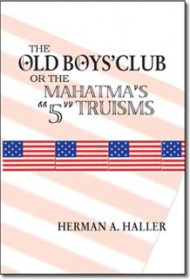 The first part of Herman A. Haller’s title The Old Boys’ Club or The Mahatma’s ”5” Truisms is a play on the tendency of retirees (like the author) to congregate in like-minded groups, but it is intended to conjure the notion of corruption inherent in the phrase “good-old-boy system.” Haller’s approach in tackling the corruption of modern society is to co-opt and expand upon five aphorisms, sometimes attributed to Gandhi, dealing with religion vs. spirituality, government vs. freedom, law vs. justice, medicine vs. health and academia vs. knowledge.

In a chatty, folksy tone, Haller makes unusual spiritual claims (e.g., the reality of Atlantis, psychic phenomenon and the existence of fairies) while demonstrating a sort of scientific skepticism: “…do you believe in UFO’s? I would if I experienced an encounter of the third kind … until then I would be of the opinion that some people … easily fool themselves …” Haller criticizes The Da Vinci Code on the grounds that it is too far-fetched while supporting the idea that Krishna and Jesus Christ were the same individual.

More than 100 pages are dedicated to the issue of religion, followed by another 100 of “synopsis.” A casualty of this arrangement is that, although Haller’s most credible material concerns taxes and the economy, it gets far less time than preceding subjects do. This trend of shrinking sections continues until the last aphorism, “Universities destroy knowledge,” which receives just five rather anemic pages.

Haller’s book isn’t academic (it lacks scholarly methodology), or likely to appeal to those looking for a new age guru, as he has no such authority. In addition it holds controversial views about homosexuality (in his view unnatural and therefore improper) and the Jews, whom he calls “the most corrupt people … that has ever disgraced our planet …” This is not likely to endear many readers to a book already unlikely to find a wide audience, despite a few interesting discussions.