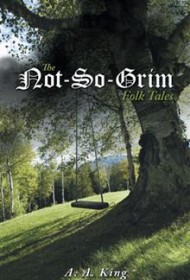 A. A. King’s The Not-So-Grim Folk Tales presents a familiar fantasy world populated by witches, fairies, dragons, and, of course, hapless mortals. Unlike most fantasy novels, however, Folk Tales is told through a series of vignettes, each with its own first-person narrator. Sometimes these vignettes advance the plot, sometimes not. Many feature recurring characters that become familiar over the course of the book.

Through its multiple protagonists, Folk Tales draws readers into the zany, complicated world of the Western Folklore Faerie Circle. It’s a community with its own rules and regulations, overseen by a wizard who hangs out in a local pub. He has agents, such as a shape-shifting witch and a wisdom-dispensing wizard, who help him with such community issues as thick-headed leprechauns or evil vampires. It’s an unusual, ambitious structure for a fantasy novel; regrettably, King is not entirely successful pulling it off. Despite their diversity, all narrators speak with essentially the same voice, which becomes repetitious, and serves to make the world of the novel feel smaller, rather than bigger.

But that’s not Folk Tales’ only problem. Race and social class are played for humor with unfunny results, and the representations of gender are tiresomely stereotypical. For example, a main character comments that the reason she won’t get married is “I haven’t met anybody worthwhile … My social circle is full of poor working-class.” Later, there is a cringe-worthy depiction of a Chinese wizard, a money-grubbing villain named “Ka Ching” who calls other characters “Most Honorable” and even lets out the occasional “Ah so.”

Sadly, while readers of comic fantasy series such as Discworld, Xanth, and Harry Potter might enjoy parts of Folk Tales, the heedless offensiveness of the humor, as well as the narration challenges, will put off many readers.