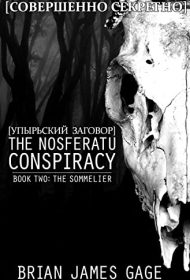 While many believe Franz Ferdinand was assassinated by revolutionaries, this story posits that his death was orchestrated by a group led by German Emperor Wilhelm II, who sought to ignite a war with France and capture a mysterious figure known as the Sommelier, rumored to possess a vial containing the blood of Vlad Drăculea. The blood can be used to gain immortality, and Wilhelm has plans of ruling the world forever. But others seek the vial for different reasons, such as destroying Drăculea’s line forever and saving the world from eternal darkness.

Few writers have the creative courage and literary chops to pull off this audacious epic that rewrites world history to include a hidden narrative featuring vampires, werewolves, demons, and an impressive assortment of nightmarish monstrosities. Gage achieves this in grand style. Enriching the unique narrative further, he includes historical figures like Countess Elizabeth Báthory, the Red Baron, and Calamity Jane, to name a few.

Powered by multiple intertwining storylines, the novel’s momentum and intensity never let up as action and adventure hurtle across the pages. One biplane chase—in which a character known as the Death Witch attempts to stop a group of heroes from escaping—will literally leave readers breathless.

Main characters are deeply portrayed with their own strong individual story arcs; even secondary characters like the giant Sebastian (a reanimated mix of human, plant, and yeti) and Mary (a shapeshifter who is far more than she seems), are intriguingly complex, adding layers to the story.

This genre-hybridized saga is one of the most wildly original and entertaining series readers will ever experience. Fans of grand-scale, genre-blending storylines like Justin Cronin’s The Passage and Stephen King’s The Dark Tower will cherish this dark masterwork.