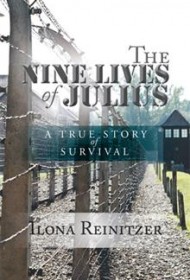 Julius Reinitzer, the author’s father, is the title character in this first-person, novelized telling of his story. Julius is a teenager from a middle-class Prague family pressed into labor in a Nazi camp during WWII. He survives the camp and returns to Prague. Later, he becomes an intelligence operative for the Americans. He is captured and placed in another labor camp by the Czechoslovakian Communist regime.

He escapes to Germany where he becomes a charter member of U.S. Army Special Forces. An epilogue informs the reader that Julius later served in Germany and also in the Vietnam War. After the fall of the Iron Curtain, he reconnects with family and friends whom he hasn’t seen since the 1950s.

Reading Julius’s tale, one is left with a powerful impression that sounds nonetheless banal when verbalized, along the lines of such bland truisms as “totalitarianism is bad” and “people can be very cruel.” He suffers brutality and privation, is surrounded by violence and warfare for much of his life, and yet he doesn’t appear to have become a violent man. Love and friendship sprout for him in most unfavorable soil.

It does no dishonor to the author to suggest that the book does not rise to the literary level of Solzhenitsyn, but readers of the latter encounter a similar world here. The choice to cast the story as a first-person narrative with copious dialogue meets with mixed success. The dialogue must carry the burden of the plot, which renders it stilted in places. The story, however, is riveting and the pace is rapid.

It is the enormity of the suffering, the looming possibility of sudden death, and the turns of fate on which survival hinges, that stupefy, while they fasten the reader’s attention to Julius Reinitzer’s remarkable story.