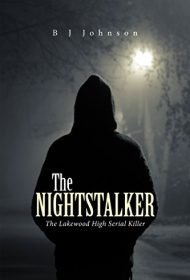 In B.J. Johnson’s novel, an underfunded, understaffed police department has more than it can handle when a serial killer – The Nightstalker – wreaks havoc on a local high school.

Detectives Linda Russo and Jackie Williams are assigned to investigate killings at Lakewood High, an alternative high school for “extremely aggressive and corrupt students.” As their work progresses, they expose a plot by white supremacists to kill all black students at the school. With lots of blood and very few clues, the school and community are in a panic.

This is a potentially interesting premise. But the story is hampered by significant issues. The plot often lacks logic; for example, after just one murder, Linda is somehow convinced that it mimics a series of serial killings in her hometown years earlier and that everyone in the school is in danger. Additionally, almost every chapter has new, irrelevant characters that quickly become impossible to track.

The timeline is also challenging, as the story shifts between the current killings in the community; the earlier serial killings; and current day happenings at Lakewood High. There’s little character development, and the story is almost entirely dialogue driven, with conversation that often seems incoherent. An overabundance of exclamation points leaves readers feeling battered, as in: “YOU ARE A CRAZY BITCH!! YOU HAD NO RIGHT TO KILL HIM!! YOU ARE A FREAKING PSYCHO!!”

Most importantly, the prose is replete with grammar mistakes and words that run together: “The vehicle is backed up and stopped, withthe [sic] motor is left running”; “Both parents wasgrieving [sic] as the father held Brad’s mother…”; “I ran into her by mistake and she told me we could past [sic] for sisters.”

A good story can sometimes overcome a few editorial problems, but this novel has too many issues to allow for enjoyment of the story. In sum, The Nightstalker is a convoluted offering that readers will struggle to complete.