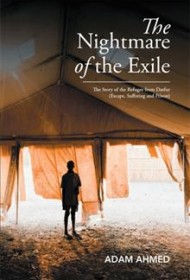 Adam Ahmed’s memoir provides a compelling, if roughly written, first-hand account of the unrest that tore Sudan apart more than a decade ago and continues to this day.

Ahmed was a Darfuri teenager when, in 2002, agrarian Darfuris demanded that the government provide hospitals, schools and roads. Some rebels resorted to violence. In response to the violence, the government encouraged minority Sudanese Arabs (called Janjaweed) to kill Darfuris, which many people labeled genocide. Half a million people died. Ahmed was among 2.5 million Darfuris who fled the violence, either internally or abroad.

The first third of this slim book depicts daily living during the author’s childhood. The mundane, repetitive descriptions of his simple rural life – where children watch cattle and roam freely, the only threats being snakes and fire — become meaningful and heartbreaking when he describes how war destroyed the Darfuris’ social fabric. He condemns the Sudanese government, the ineffective United Nations relief agencies and governments that accepted refugees but then persecuted them.

Ahmed’s memoir is heartfelt, but his writing stumbles. Non-linear and unorganized, the prose (translated from Arabic or an African language; he doesn’t say which language he originally wrote in) is inelegant, with significant verb tense problems.

Nonetheless, his story and testimonials from friends make his account highly credible. In early attacks, for example, villagers knew the Janjaweed – arriving on horses and camels – were assisted by government troops because troops arrived in trucks.

While the author’s writing would greatly benefit from a professional edit, those who can overlook the narrative’s obstacles will find a valuable, seldom-heard perspective that could  supplement dry descriptions of post-colonial Africa’s civil wars. Published as the world watches Syrian refugees flee to Western Europe, it shines much-needed light on a miserable, often-neglected situation. As the author sorrowfully notes: “Refugees are like a page in a book that people can easily rip out and remove.”