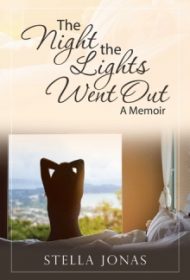 Stella Jonas was in a coma for five weeks, during which time her family fought for her (and with one another). The Night the Lights Went Out is ostensibly about her illness, but family drama is also very much a part of the narrative.

Jonas, who calls herself Leilah Raye without explanation, describes ending up in the hospital for reasons nobody can fully explain, although they may be related to her sickle cell anemia. She describes moving from “Bad News Hospital” to “Hope Hospital” and describes family interactions that took place while she was unconscious. When she comes to, she undertakes physical and speech therapy, retires from a long-held job, and regains some independence. She also ends her marriage.

It’s hard to fault Jonas for guessing about what happened while she was in a coma, but much of these passages include negative opinions about her family with no explanation as to why she has those feelings. She changes the locks and puts her husband out in the street because, “I didn’t have time for the adolescent behavior,” but never shows us what that behavior consists of. She describes being combative with some of her health care workers as if it’s something to be proud of, and feels compelled to note, “Wesley is not my favorite nephew,” when describing a visit the young man made to her in the hospital.

It’s hard to know what Jonas’s goal was in writing The Night the Lights Went Out. If it was to get a degree of retaliation against her family, perhaps it’s a success. Unfortunately, as a memoir or insightful account of an illness, there’s simply not enough description, context, or overarching story here for readers to connect with, rendering it a disappointing read overall.