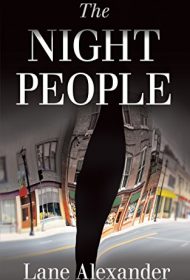 Cross Harry Potter and the gang at Hogwart’s with the gifted mutants at the Xavier Institute for Higher Learning from X-Men, and you get something like The Night People. This entertaining science fiction book for young adults addresses themes of loneliness, bullying, acceptance, and first love.

The story begins with 16-year-old Kyle entering Banville Academy, a private boarding school for telepaths, telekinetics, empaths, and night walkers. Kyle, who falls into the rare, last category, has always been troubled by terrifying dreams; he enters another dimension during sleep—a horrific place where ravenors (energy vampires feeding off negative human emotions) can kill him in both dimensions. School administrator, Dr. Jameson, is the only other night walker at the academy.

Having flunked out of other schools, Kyle believes his stay at Banville also will be brief. His earliest encounters there are with grouchy caretaker Elmore Grubbs (a la Argus Filch) and a Draco Malfoy-like bully named Cody, who envies Kyle’s unique powers. Two students, a telepath and a telekinetic, befriend him, and he finally feels less like a mutant because of his abilities. With growing threats, students and faculty join forces against ravenors and other dangerous otherworldly creatures.

Creative world-building within the ravenors’ realm provides an effectively creepy backdrop for Kyle’s dreamscapes. The narrative also includes light touches of humor that its young audience will appreciate. For example, a celebrity is named “Ariana Gomez,” blending the names of real-life pop stars Ariana Grande and Selena Gomez. Also, Kyle, is a perpetual outsider until he finally makes friends at Banville—something many young readers will relate to. The book’s satisfactory conclusion leaves the academy door open for more books in the series.

Although The Night People has a few too many similarities to the Harry Potter books (lonely boy with super powers, magical school, mean school nemesis, trio of friends, etc.), the story has enough fun new elements to attract young fantasy readers to the series.