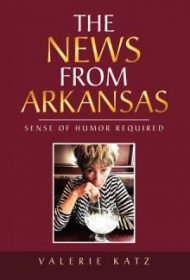 Valerie Katz’s life took an abrupt turn when the self-proclaimed California girl decided to pull up stakes and head to Arkansas —a move chronicled in this detailed memoir.

Inspired by a TV commercial for a residential real estate development, Katz and her husband, David, moved to Bella Vista, Arkansas, in 2007— and quickly experienced culture shock: “Arkansas was almost a foreign country to us,” she writes. To inform family and friends back home of her adventures, she relied on emails containing the subject line: “The News from Arkansas.” Those emails make up this book, which encompasses around ten years.

Katz writes with a light touch and sense of humor. But she’s saddled with material that’s mostly mundane: She plays cards with friends, watches birds in the yard, gets her nails done. One big exception occurs when David is diagnosed with cancer. Then, Katz’s emails turn into increasingly discouraging medical updates that culminate with his passing. Admirably, she avoids being maudlin and lets readers feel her sadness.

The book faces other drawbacks, in addition to the material’s limitations. Initially, entries come a few days apart. But about halfway through, her correspondence sometimes disappears for as long as three months. This impacts the story’s flow and sense of immediacy.

Additionally, when she writes about her travels, the entries have a sameness to the point of predictability: She forgets to bring her glasses, phone, passport or charger; she gets lost; there’s an unending string of electrical problems with her motor home. Another issue is the time frame. Entries are dated, but may refer to something that occurred “Monday” or “Friday,” for example. Was that the day before? A week before?

Such problems affect the book’s enjoyment, as does the fact that almost everything revolves around the author and her inner circle. Had Katz offered some universal lessons, the memoir would have had wider appeal. As is, The News serves its purpose as a memento her family will cherish.