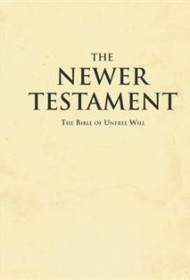 For the last two millennia philosophers, scholars, theologian and bar buddies at the local water hole have argued over whether or not we have the ability to choose our own destinies. In The Newer Testament: The Bible of Unfree Will, the collective writing team known as The Master Teachers offers a series of meditations, reflections, and discourses on the nature of free will.

Their conclusion? That life as we know it is already planned out in the most intricate of manners, and that, free will, a pretense they say is prevalent in our modern thinking to the point of ad nauseum, is a sham.

What determines this predeterminism? The simple fact of cause and effect, that every action that we take has an ancestor somewhere in our physical bodies or in society itself. “[Free will] is a mythical monster… Every moment of the universe and all human lives are dependent on the moment before.” This ultimately asks the question: can we be held responsible for our actions? For the authors, the answer is no. This is not to say that there is no right or wrong in the world. As the authors point out, “I’m not saying there aren’t ‘good guys’ and ‘bad’ guys. All I am saying is that these people you call good or evil were just fated to be so.”

The Master Teachers are breezy writers with a snarky sense of humor, and the text, in general, is easy to read and digest. It’s problem, however, is that their arguments and hypotheses are mostly opinion. There are no footnotes, no bibliography, and no sources to legitimately back up their ideas. Moreover, the book is just too long (570+ pages) for general readers to endure for its entire length. A condensed, edited, and annotated version that played to the authors’ strength of simple and humorous insight would greatly benefit not only the writers but readers as well.