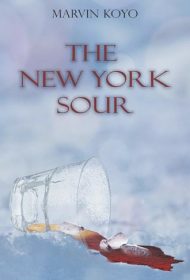 In Marvin Koyo’s The New York Sour, a family involved in the auto repair business seeks to solve a murder and find the missing company shares belonging to a family member.

As the story opens, it’s Christmas and members of the Bracho family are partying at a bar in Times Square, enjoying a traditional holiday concoction called alternatively “The New York Sour,” and “The Continental Sour.” But things soon go amiss both inside, where a sexual assault takes place, and out, where gang members and drug dealers engage in a shootout.

Victoria Bracho arrives home in the wee hours, vomits repeatedly, then dies. Her husband Hector is quickly arrested for the murder, prompting his twin brother Eddie and cousin Felicia to launch their own so-called investigations into the murder and Eddie’s missing shares. Meanwhile, the violence continues as Hector cools his heels in jail.

Koyo is skillful in depicting the camaraderie between young friends and family: the casual banter, the scuffles that end as quickly as they flared up, the humor they share, such as when Felicia sings “Ring a bell, ring a bell, ring a bell on the way …” explaining that she has her own version of Jingle Bells.

Unfortunately, technical issues make this story extremely difficult to read. Nearly every page is riddled with writing mistakes. Often, the author uses the wrong word (i.e, “redundant” for “repeatedly”), and some sentences make no sense at all, for example: “Confined by the time and place he rerouted himself on an investigation through social media.” The text includes missing words and incorrect punctuation and grammar. Equally disturbing: the violence in the story elicits no consequences or even much emotion.

Koyo seems to have the potential to become a good storyteller, but the lack of proper writing mechanics overshadows any highlights in this story, and readers will likely find it hard to persevere to the final page.