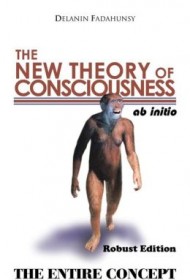 This work poses a new theory of consciousness based on an evolutionary, biological perspective. The author links consciousness with attention. He posits that consciousness began to emerge with the simplest organisms and then grew in complexity, from plants, to animals, until it achieved its most advanced manifestation in humans.

Author Delanin Fadahunsy discusses the origin of sleep, the reason we dream, and the phenomenon of sleepwalking. He also asserts that the evolution of organisms occurs as a result of a conscious process as opposed to the random action of natural selection.

Fadahunsy may have something worthwhile to say, but he does not say it in a way that’s easy to follow. He begins with a lengthy, unfocused prologue, throughout which he frequently employs his own neologisms before defining them, leaving the reader baffled. The prefatory material alone, which includes a wordy biography of the author, runs to over 60 pages. At last, readers find their way to Page 1, having persevered through some rather dry verbiage.

The writing is replete with convoluted, run-on sentences. Unnecessary commas pop up randomly in the middle of sentences, and the author seems especially enamored of his own self-proclaimed innovative thoughts. The book would be more effective if Fadahunsy simply stated his ideas and allowed readers to make up their own minds as to the value of his contributions.

The author of a nonfiction work has the obligation to present his ideas in the clearest, most concise and easily accessible manner possible. Fadahunsy has not met this burden. The writings of thinkers such as Einstein or Wittgenstein are difficult because the thought is advanced, not because their writing places obstacles in the way of the reader’s comprehension. Fadahunsy might consider finding an editor and re-presenting his intriguing theory in a more straightforward manner in order to widen the appeal of his book.