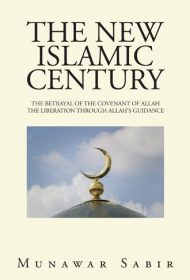 On the back cover of The New Islamic Century, author Munawar Sabir laments the lack of religiosity among Muslims, which he blames, in part, for “the wretched condition of Muslims today,” among other issues.

While Sabir’s main thesis is difficult to tease out of his lengthy, multi-faceted narrative, in general, he suggests that religiosity would root out economic ills. The author accuses Islamic states and leaders — from oil-rich states to those below the poverty line—for enabling the “circle of evil” that keeps Muslims in subjugation. (He doesn’t, however, explain how to distinguish between nations that are “Islamic” and those that are not.) At the individual level, he advocates honest and moral behavior. Communally, he promotes unity and common purpose (although he doesn’t elaborate on what this common purpose is). The last chapter outlines what a well-functioning Islamic community looks like, in general terms.

Sabir offers some interesting thoughts throughout, but his book seems more like a compendium of rants than a well-reasoned piece offering solutions. Often, his arguments suffer from over-generalization. For example, while it’s true that literacy rates for Muslim-majority countries lag behind the world’s average of 86.3%, as Sabir laments, four Muslim countries make the list of the top ten most literate countries (all higher than any of the G8 countries).

Sabir also suggests ideas that seem untenable. He notes that the main solution for effective governance is agreement within the Ummah (community of Muslims). However, reaching consensus within any country is a Sisyphean task. Considering the diversity among Muslims, finding complete consensus—even within Muslim-majority countries—seems practically impossible.

The author additionally recommends moving to a bullion standard, banning fiat (printed) money and interest, and calculating “lost” productivity due to underemployment. But bullion-backed currency without fiat currency would severely hinder commerce. Even Muslim traders during Islam’s Classical Age were using IOUs and checks for their transactions (which eventually evolved into fiat currency). In fact, the word “check” is derived from the Arabic sakk, which is equivalent to a letter of credit.

In sum, The New Islamic Century is likely to raise more questions than it answers, frustrating readers as often as it informs them.