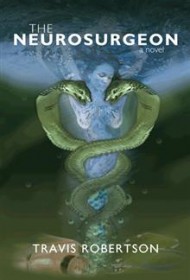 The cover of The Neurosurgeon is a moody illustration of a nude woman underwater with the twin snakes of a doctor’s caduceus wrapped around her. The image is so ominous, along with the jacket’s description of the beautiful nurse who “harbors evil intentions” and a noir-ish prologue, that it seems to presage evil and violence.

The book is not about a drowning, murder or even evil intentions, however. It’s a psychological drama about a successful neurosurgeon who is an alcoholic and philanderer. Author Travis Robertson, an actual brain surgeon, hooks readers with his taut, suspenseful prose, believable characters and telling medical knowledge.

The story’s narrator and eponymous superstar doctor, Ira Stone, is believable but not likable at the story’s start. He’s nasty in his swagger, sexism, and selfish embrace of sex and booze. The book follows Stone from childhood through college, his career, several wives — and his torrid affair with the mysterious, damaged nurse, Stephanie DeLeon, whose life intersects with Stone’s in more ways than he knows. The plot is framed at an addiction center, where Stone’s life story unfolds as part of Alcoholics Anonymous’ group therapy.

At times, the lurid sexuality and twisted emotional knots of the affair make the narrative teeter on the edge of soap opera. But Robertson manages to keep the story from slipping into the suds. Throughout, his writing shines with strong imagery and a flowing style. The only nit: the book would have been tighter — and readers’ expectations managed a little better — if Robertson had eliminated the prologue, which sets up DeLeon’s mental state. While well-written, the scene is disconnected from the rest of the narrative, especially since DeLeon doesn’t make her first appearance until almost halfway through the book.

By the end, though, that stutter-of-a-start is forgotten as loose ends get tied up and Stone comes to peace with himself. It’s a satisfying close for what turns out to be an enjoyable read.