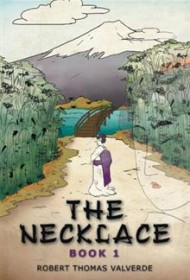 This ambitious historical romance set in Japan and Rhode Island during the turn of the 19th century is a melodramatic tale of culture clash and love betrayed.

When, in 1890, 21-year-old Roderick Christian Stone, a devout Catholic, comes to Kyoto to negotiate establishing a mill factory, he becomes infatuated with 14- year-old Ichimitsu, who is training to become a geisha. While Ichimitsu is “the most charming, talented and the most beautiful of all who lived in the geisha house,” she is also a typical teenager whose behavior alternates between pouts and giggles. After Roderick and Ichimitsu steal away and spend the night together, he vows to marry her, but in the tradition of star-crossed romance, he is called home because his father is ill, and his letters fail to reach her.

As a pledge of their troth, Roderick has given his beloved a necklace inherited from his grandmother, which Ichimitsu continues to wear as misfortunes plague her. Cast off by her greedy, vain mother, Ichimitsu is sent to live with her equally loathsome uncle, who, after a series of misadventures, sells her to a brothel. Meanwhile, Ichimitsu’s twin sister, who was born with a scarred face, is forced by their mother to pretend she is Ichimitsu, leading to unfortunate consequences for all.

The events occur over nearly 500 slow-moving pages, which mark only the end of Book 1. To Valverde’s credit, he intersperses interesting nuggets of Japanese history, folklore and customs; an extensive bibliography testifies to his research. He has a tin ear for dialogue, however, and an unfortunate tendency to let it drag on. He also indulges in baffling constructions (i.e.: “ …to vent the bile of her bleeding pocket of greed.”) Anachronisms (“we can kick labor’s butt” ;”No way… I’m out of here”) are liberally sprinkled throughout.

In sum, this novel would have benefited from good editing. Lacking that, it demands a patient reader.