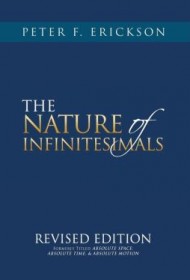 Welcome to the world of the finite, sub-finite, and infinite; actual infinity versus potential infinity; the measurable and the immeasurable. Author Peter F. Erickson states that the purpose of his book is “to prove the existence of the infinitesimal and reveal some important facts regarding the nature of numbers and the outer infinity…” While it is difficult to “prove” the existence of things that cannot be seen, Erickson makes a reasonable and valuable argument.

In Chapter 1: The Plan of the Book,” Erickson lists the mathematical constructs he will support or refute — and he delivers on those as the book progresses. Laid out in as orderly a fashion as that first chapter, The Nature of Infinitesimals is well edited, with only minor punctuation flaws. And although this is heady material, not intended for novices, those who approach it with effort and patience will find that it’s actually a smooth, albeit slow, read. Erickson’s reader-friendly style brings these (almost wildly) theoretical concepts into focus and manages to describe metaphysical mathematical entities so that they can be “seen” in the mind’s eye. What appears as quite daunting initially turns out to be a real learning opportunity for serious students or teachers of mathematics.

While it may at first seem that Erickson is about to challenge everything most mathematicians hold dear, this isn’t necessarily so. He does offer a different way of viewing, among other things, the number line as finite rather than infinite, and he even proposes that division by zero is possible. But this is only when considered within the context of the infinitesimal, a perspective that is not assumed in pre-calculus classes and may never even be discussed in classes of calculus and beyond.

Anyone who enjoys deeply pondering the idea that a point must occupy an absolute minimum space (albeit below the level of finitude), and therefore that two points can exist ‘side by side’ will find much to consider here. After all, as Erickson so well puts it: “What is humanly unreachable is not the same as that which cannot be.”