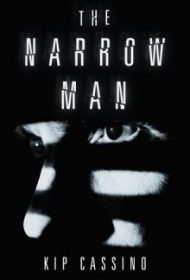 Kip Cassino’s taut thriller follows a deranged man on a bloody mission, as well as the law enforcement officials on his trail.

In 1986, Vietnam veteran Karl Thibault resides in an institution for the criminally insane. Suffering from extreme PTSD, Karl is in prison for the murder of his now-ex-wife’s lover. Karl has bided his time and is now ready to break out and finish his mission: to kill any other man who has “used” her sexually, and to kidnap their young son, David.

Armed with information from David, Karl brilliantly and ruthlessly traps his quarry. As the body count from his mission mounts, Karl plots to elude law enforcement and make a final escape to Brazil.

Readers should be aware that The Narrow Man includes multiple, graphic scenes of torture and other violence (including sexual violence). Rather than being gratuitously exploitative, however, these scenes feel germane to the story and its characters.

As a psychotic, PTSD-addled Vietnam veteran, Karl could have been reduced to an offensive stereotype. Instead, Cassino offers a nuanced portrait that humanizes him. A scene in which Karl visits the Vietnam Veterans’ Memorial in Washington, D.C., is especially powerful. The other characters, too, reveal complex pasts and motivations.

Cassino, a Vietnam vet himself, is a top-notch writer, at times poetic. For instance, he refers to Vietnam as a “confused opium dream of a war . . . a conflict where the rotation of those in charge guaranteed an annual amnesia.” He even injects humor into the grueling story, as when an FBI agent who has started smoking again from stress muses that “Thibault would end up killing him, too—with cancer.”

The novel’s pace never lets up. It’s no small feat to balance a fast-paced story and relatively slim page count with such rich character development and narrative style. Although decidedly not for the squeamish, The Narrow Man will be a treat for thriller fans who relish substance with their suspense.