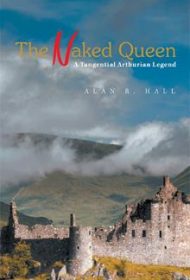 The story Darien tells King Arthur opens with scenes of explicit sexual content. The King of Tabithia, Ballizar, has devised a terrible ritual whereby the first night of each full moon, a maiden must submit to being raped publicly by twelve men. Fortunately, a naked stranger called Syrenya soon arrives. She is able to survive the ritual and take the King as her lover – even though all previous women have been battered by his lovemaking, as King Ballizar is so sexually potent that he injures any woman he has sex with.

Ballizar and Syrenya marry and rule the country together, soon adopting an orphan boy, Darien (the man telling Arthur the story), as their son and heir. The sex scenes diminish and a more traditional story of a medieval court emerges (although throughout, Syrenya appears completely naked or wearing only a cloak). Darien’s life becomes the narrative’s main focus as he grows to manhood and protects the kingdom from treachery and rebellion. Toward the last quarter of the novel, the story feels somewhat like an Arthurian quest: Darien is uncertain of his future and needs Merlin’s help to discover his true identity.

Darien is a likeable character, but unfortunately, he lacks realism, as do the other characters, even within the context of this unusual medieval fantasy world. A lengthy scene where his semi-naked adopted mother Syrenya explains sex to 13-year-old Darien is so unlikely that it renders both characters unbelievable. Meanwhile, the sex scenes are oddly tame and framed by narration meant to sound historically accurate (“He did take her roughly… [she] did instead pleasure him…”), but instead prove distracting.

Those willing to suspend disbelief may find rewards here. Still, for erotica readers and fantasy fans alike, a small bit of realism would go a long way.