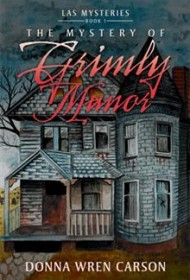 Donna Carson’s first book in her LAS Mystery series teams sixth graders Leira, Addy, and Skye to solve the mysteries of Grimly Manor. Lights flicker at night in the cemetery behind the manor. Before every holiday, the manor is mysteriously decorated while the neighborhood sleeps. And Mr. Grimly–always wearing a mask–only opens his door on Halloween to give out candy.

The girls decide to go meet Mr. Grimly, thinking that perhaps he will open the door to them before October 31. Leira narrates, “When we reached the old, warped door, Skye took a deep breath and knocked slowly three times. With each bang of her fist hitting the door, Addy and I took a small step backward. Suddenly, the air was split with a ferocious growling from behind the door! …With terror in my eyes, I shakily said, ‘OK, why don’t we try this some other time?’”

Abandoning that mission, the girls set out to spy on the manor. During a backyard campout, they sneak from the tent to watch for night activity. (Yes, they are caught, and their parents hold them accountable.) No spoilers, but the girls learn that things aren’t always as they seem, and subsequently, their kindness brings joy into Mr. Grimly’s life.

One story thread concerns a classmate who picks on Addy. The scene is set for Jeffrey to be in future books; so hopefully, how to deal with teasing will be addressed.

This book is well proofread, although there are a few minor style issues. Most obvious is an overuse of adverbs in place of stronger verbs.

The Mystery of Grimly Manor reflects wholesome family values while portraying realistic preteens. Carson’s character development, natural dialogue, and plot are strengths that will keep readers turning the pages and clamoring for the next book in this series.