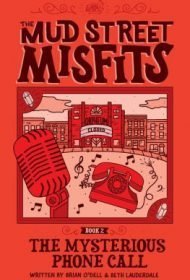 After their first outing in Brian O’Dell and Beth Lauderdale’s The Girl in the Blue Tie-Die Shirt, friends who call themselves the Mud Street Misfits return in a fast-paced, engaging adventure, The Mysterious Phone Call.

In their first appearance, the group faced down bullies and sought to understand the psychic powers experienced by Liam, a talented music student amongst their number. Here, the focus falls on Sarah and David, sister-and-brother Misfits who are deeply dismayed by their parents’ (two moms) decision to move from the small town of Ozark to Chicago. And Sarah determines that she won’t leave without doing her best to save a disused Civil War-era theater under threat of demolition.

The story pits the Misfits against Ozark’s greedy mayor, who is set on tearing down the Orpheum in order to build condominiums. The friends bring research skills, diplomacy in interacting with adults, and courage to their effort. Racing against the demolition deadline to find evidence to certify the building as an historic landmark, they also demonstrate admirable persistence as, time after time, their research leads to dead ends.

The psychic element is again present as Sarah — an adopted child worried about leaving the one place that has given her a sense of belonging — experiences visions of the theater’s ornate interior peopled by a spectral audience. Meanwhile, a ghostly woman and/or her cigarette smoke make occasional appearances. And yes, the Misfits witness the titular mysterious phone call.

Consistently well-paced, the novel delivers believable and lively dialogue among resourceful young people who bring friendship and determined positivity to their mission. A particular plus comes when the group uses inspiring intelligence to think through how to handle getting attention for the theater, deciding between protest and celebration. Hard-won insights for Sarah and an upbeat conclusion add to the satisfaction of this appealing narrative.

In all, this a winning selection for young adult readers and would be a wonderful addition to school and public library shelves.