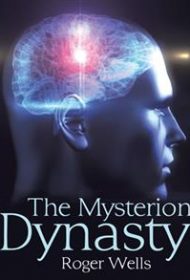 In The Mysterion Dynasty, author Roger Wells offers a phenomenological investigation of the human mind. Wells’ work could be classified as philosophy (although he dislikes classification), but relies solely on direct experience, not scholarly sources. Indeed, he claims that anyone can see how the mind works either by simply asking it in earnest, or through a program of structured sleep deprivation.

The Mysterion Dynasty encompasses decades of Wells’ investigation in a collection of five books, now published as one master volume. In it, he states that one part of the mind seeks information and the other responds with “picture monitors” or “memory disks” whose images compel us to action. These monitors are embued with specialties (emotions, empathy, etc.)  and show idiosyncratic images, such as a stick figure clown and cartoon animation. (This is never satisfactorily explained.)

Wells’ model collides with traditional theologies. He describes the “manager of memory disks” as an intelligent, transcendent force, offering a perfunctory comparison to Hinduism. He also describes an “energy being” called Mysterion, who he labels the “lord of the universe” (although he cautions against regarding either as a creator god). Moreover, Wells claims Mysterion has asked him to reveal the mental flaw behind every human conflict, in order to save humanity. Ironically, while Wells spends considerable time railing against zealotry, he has essentially proposed a new religion and disingenuously portrayed himself as a reluctant prophet.

Wells’ project is exceedingly redundant and riddled with puzzling comments and contradictions: for example, he tells readers that picture monitors and memory disks are different, then later writes that they are the same thing. Additionally, many, if not most, readers will find that their experience of their own minds is far different than the author’s (how many of us experience thought as pictures, including clowns and cartoon animation?).

Finally, obvious questions remain unexplored: If monitors can compel our actions, is there room for free will or accountability? And he describes many parts of the mind, but never identifies which of them is “me”; is the self a fiction? When he grapples with any of these, the topic is almost immediately abandoned.

Perhaps most importantly, The Mysterion Dynasty lacks a target audience. By writing an account of the mind based entirely on his own subjective experience, Wells has likely guaranteed that his book can only be relevant to one person: himself.