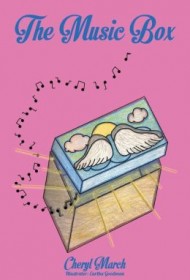 In The Music Box, Cheryl March relates the story of Debbie Brown, a young girl who reluctantly attends a family reunion, only to find surprising reward in doing so.

During the occasion, Debbie’s attention is drawn to a dreamy older woman who sits apart from the family activities holding a small box. It turns out that the woman is Debbie’s Great Aunt Shirley, and she possesses both a story and gift that she will pass on to Debbie and Debbie’s brother, Sam.

Before the children can receive the gift, which is no ordinary music box, they must attend to Great Aunt Shirley’s story, a tale about a girl called Eartha who was rather miraculously rescued from almost certain harm when she spurred her horse forward into the path of a vehicle. Debbie and readers soon learn that it was no accident that the collision was averted. In fact, Eartha’s safety was ensured by the intervention of a guardian angel called Vanessa, who endows Eartha with the music box to pass down to later generations, a fact the children learn along with other revelations.

March’s book is clearly heartfelt, but it lacks technical polish. The author sometimes loses her grasp on tense, as in, “A few minutes later, she’s surprised by a knock on her door. It’s Mom telling her to come and eat. And although she wasn’t hungry, she was not about to make things worse.” March also shifts point of view randomly, as when she makes a jarring change from the omniscient to first person. Copyediting is absent at several junctures, including in the statement, “Once all the food was put away her [sic] ran her dishwasher.” At another point, Debbie is suddenly called “Debra.”

Ultimately, a story that aims to inspire awe falls short of that target thanks to flawed writing mechanics. Readers should also note that while Eartha Goodman is named as illustrator, the book contains no interior illustrations.