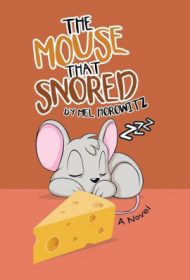 Mel Horowitz’s The Mouse That Snored (not to be confused with The Mouse That Roared) satirizes the British monarchy and democratic republic of the United States, showing how they might have evolved in the microcosm of a forgotten island. Coincidence plays a major role as several characters, young and old, find their soul mates before story’s end.

It all begins when Humboldt Yolo Stanislaus IV trips over a bottle on a Bermuda beach (the first of many pratfalls by Humby and a cast of wildly unlikely characters). The bottle contains a map of how to find New Britannia, an uncharted Atlantic island that the U.S. government knows exists but the rest of the world has somehow overlooked. The islanders’ ancestors were deposited there in the 1770s by the British, who promised to return them to the Continent once the British won the Revolutionary War. But nearly 250 years later, little has changed in their pastoral lives.

This seems an ideal spot for hiding a microchip containing America’s defense plans. Because the island is ruled by a cheese-loving countess, the plan is to hide the microchip in the royal cheese vault. When Humby, emissary to the island, arrives with the chip in a block of cheese, he becomes involved in a brewing revolution with the direct descendants of Washington, Jefferson, Hamilton, Franklin, and more — and eventually finds love, as do other characters.

This is farcical, and demands a reader willing to play along. But even those with a penchant for this genre will likely weary of the author’s attempts at slapstick comedy, such as Humby’s constant tripping over things or the new Dr. Franklin’s failures in inventing a better mousetrap. And while satire should illuminate important issues, as did The Mouse That Roared, a book that concerned the Cold War, many may find this story more silly than salient.

Still, Humby displays endearing qualities, which may help readers summon the patience to cheer him on to a happy ending.