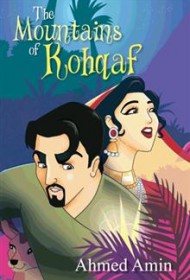 Ahmed Amin’s The Mountains of Kohqaf is a short fairy tale written for a pre-teen audience.

The storyline revolves around the young shepherd Azeen’s quest to rescue Princess Almera, who has been abducted by the memorably named giant ogre Gaboul, who desires her for marriage. The tale fits snugly into the damsel-in-distress formula, updated for a contemporary audience. Here, the youth is humble and the damsel is royal but possesses a sassy and strong-willed attitude, presumably to make her seem somewhat less helpless and more comparable to today’s girls, even though she does need Azeen to pull her out of trouble.

The abduction scene is a bit disturbing, but the rescue quest is engaging enough to provide a solid outline for another treatment, such as a comic book, graphic novel, or animated film. As a novel, however, the material needs a good deal of work, including serious copyediting to correct missing punctuation, run-together words, misspellings, and even a mistyping of the giant’s world itself, Kohqaf. There are also many cases of awkward wording, such as, “The walk was much longer this time expected and he started seriously regretting his careless decision.”

While significantly flawed as a literary effort, The Mountains of Kohqaf has much to recommend it as a work of imagination. Strong on quick descriptions of unusual scenes and creatures, it would surely provide some exciting guidance to cartoon artists depicting the fruits of Amin’s imagination. These include lilac bushes that bow and form an arch over the key characters, skies that change color in reaction to characters’ emotional states, a charming deer with eyes so bright that they can cast light on the night landscape, mountains that point downward, and much more.

Although not ready as a polished novel, this is nevertheless a work of real imagination that might find success in another medium targeting a pre-teen audience.