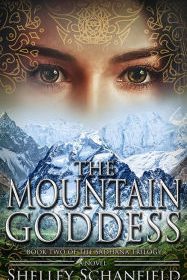 Equal parts historical fiction, mythic fantasy, and transformative spiritual journey of self-discovery, the second installment of Shelley Schanfield’s Sadhana trilogy (after 2016’s The Tigress and the Yogi) continues the saga set in ancient India that chronicles the lives of women associated with Prince Siddhartha, who later became known as the Buddha.

A thick braid of intertwining narratives, the story’s most intriguing characters are female. Mala is a wandering yogi seeking a solitary retreat in the mountain goddess’s sacred cave. Accompanied by a massive white tigress named Rani, Mala lives high up in the Himalayas practicing the Lord of Yoga’s disciplines. But the wise woman is far more than what she seems. Meanwhile, Dhara is a young village girl who, instead of marrying and raising a family, wants to be a “seeker of wisdom” like Mala. The yogi takes in the girl to train, but they both become entangled in the social and political upheaval occurring amongst the kingdoms below.

The story is powered by profoundly moving philosophical speculation, such as when Siddhartha questions what’s true about life and death: “I’ve started to think there’s no answer. That all we know is the round of birth, death, birth again. How we go about getting off that wheel… doesn’t matter as much as how we live.” Thus, the story works on two levels: it entertains and enlightens.

Schanfield has created a vividly described, fully realized world inhabited by a cast of authentic characters that readers will connect with emotionally. The only criticism is that the serpentine plot sometimes veers off track to include a tangential storyline or related legend. These moments bog down the narrative’s momentum.

Tonally comparable to Carlos Casteneda’s shamanistic Don Juan books (The Teachings of Don Juan: A Yaqui Way of Knowledge, et. al.), this is an epic story of love, loss, war, and prophecy. Fans of grand-scale historical fiction from writers like Guy Gavriel Kay will find this well worth the read.