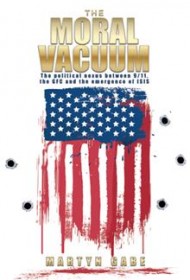 Martyn Gabe has undertaken an arduous and grim task: To convincingly show that the 9-11 attacks, the 2008 global financial crisis (GFC) and the rise of the Islamic State are all intimately linked.

In The Moral Vacuum, Gabe asserts that the unifying force is greed, specifically that of American corporations, in collusion with their handmaiden, the U.S. government. Gabe avers that “facts”—many of them arguable—lead to what he sees as the inescapable conclusion that the government engineered the 9-11attacks, not terrorists, and that the government, as manipulated by corporate interests, intentionally crafted the housing bubble and ensuing the worldwide recession. In this way, it abetted the rise of ISIS, whose perceived threats fed the profitable American war industry.

To accept Gabe’s theory, you must concede, among other claims, that a guided missile struck the Pentagon, not a commercial jet. And that the exquisitely timed detonation of secretly planted explosives brought down the Twin Towers. Gabe understands that some readers will vehemently disagree, but all he asks is open-minded consideration.

Gabe’s writing is clear and passionate, sprinkled with an occasional clever turn of phrase. Readers should have no complaints about his style and articulation. What’s problematic, however, is the author’s argument that such a conspiracy explains disparate events. Even if one concedes that the rise of the Islamic State was a reaction to the excesses of Western civilization, it’s a huge step to show that it was all directed by greedy capitalists. Gabe doesn’t cite sources for his “facts” and leaves readers guessing, for example, how someone could have planted explosives in the Twin Towers without being noticed. Instead of direct evidence of the existence of such a conspiracy, the author offers circumstantial linkages that require a large leap of faith.

Many readers will find the theory too fantastic to entertain. Consequently, Moral Vacuum’s most likely audience would be those seeking evidence of dark forces controlling world events or readers curious about the minds of people who believe the cabal exists.