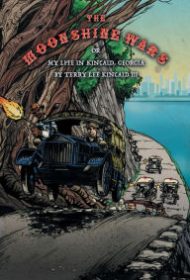 The Moonshine Wars, by first-time author Daniel Micko writing as Terry Lee Kincaid III, is a warm-hearted account of how a backwoods black pastor in 1880s northern Georgia introduces a hard-drinking parishioner to an earnest but dirt-poor local white boy, changing the lives of three generations forever.

In this well-told, semi-autobiographical novel, the author’s mixed-race lead character, Kincaid, relates with relish the pivotal role played by his redneck relatives in the meteoric rise of legendary Big Boy Moonshine. He first focuses on the fateful bonding of Preacher Bo (we never learn his last name) with congregant Big Jim Spicer.

As Kincaid tells it, the potent homemade brew is conceived one drunken “Moonshine Saturday Night” after Preacher Bo and Big Jim choke down a prodigious amount of third-rate, arsenic-laced white lightning. Big Jim vows to make a better product and goes into business with Kincaid’s granddaddy, giving birth to the potent new brew. The rest is, as they say, history. The tale goes on to reveal many compelling characters and their parts in Kincaid’s past, including his black grandmother, Alberta, and her heroic task of raising two brothers—one white, one black—to manhood.

Author Micko, himself biracial, narrates this tale as if speaking conversationally, and includes dialectical misspellings, such as “Good ole’ boys”; “goin’”; “talkin,’” etc. This takes getting used to, but as the story gains momentum, he weaves a fascinating narrative reminiscent of Forrest Gump; the story is packed with folksy anecdotes and pithy wisdom, such as, “Life is not what you see but what you do about it,” and, “An ounce of blood is worth a pound of friendship.”

Written and edited with a natural storyteller’s hand, the author showcases his command of down-home dialogue and the adventures of his offbeat ensemble cast, rendering this work of fact-as-fiction into a stark but often humorous look at what it meant to be black—or white—in turn-of-the-past-century Jim Crow Georgia. All-in-all, it’s a rare and satisfying read.

Blueink Heads-Up: This novel may be of particular interest to Georgia libraries, as it deals with moonshining in the swamps of northern Georgia, near Atlanta. It also gives anecdotal insights into the impact of late 19th and early 20th century segregation across the region.