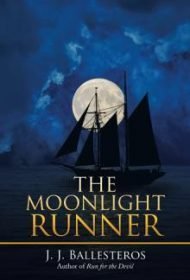 Retired federal agent J.J. Ballesteros draws from a career combating weapons and drug trafficking in Mexico and Central America for this sprawling second novel, a sequel to Ballesteros’ debut novel Run for the Devil (2017).

While the narrative is missing some backstory, readers will parse the plot from context. The bad guy is drug lord Fausto López, a man so malevolent he’s known as “El Demonio” — the Demon. He leads a hive of villainy on the Yucatan Peninsula coast.

The Demon’s eventual adversary and reluctant hero is reformed smuggler Simon Donovan, now a charter boat captain. His crew consists of Augie, Benício and young Poli, who not only suffer the natural friction between men sharing close quarters, but heightened tension because Donovan is having an affair with Benício’s wife, who is also Poli’s mother.

The plot is dense and complex, but it centers on the Demon’s plan to rally gangs to defeat the Norteño cartel, led by Colonel Aníbal Barca Rayos, also known as “El Rayo” (the “Thunderbolt”). To advance his complex war strategy, the Demon needs to smuggle hundreds of guns from Texas, and Donovan’s ship is the only local vessel quiet and fast enough to make the midnight run.

The Demon makes Donovan an offer he can’t refuse, but with some help from his crew, a local professor and a nun, the wily smuggler does his damnedest to escape this devil’s bargain. Meanwhile, substantial interstitial flashbacks inform us about Donovan’s troubled past.

The plotting is somewhat overzealous, but to his credit, Ballesteros never buries the lede, moving the narrative squarely towards the inevitable showdown between Donovan and the Demon. Although a little light on action and heavy on dialogue, the story’s authenticity and well-wrought cast of characters lend it a gripping realism.

While the narrative is too dense to be a page-turner, readers who enjoy immersive crime sagas will appreciate its Gordian composition and conflicted hero with everything to lose.