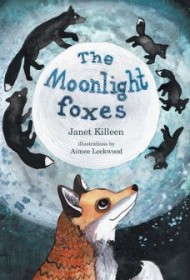 In her picture book, The Moonlight foxes, Janet Killeen recounts the story of a pair of foxes, Reginald and Rita, and their family.

At the outset, the fox couple flee construction in the area of their original den to settle underneath a backyard shed in time for the birth of their four high-spirited cubs: Rosie, Rupert, Roberta and Roger. The parents’ experience of danger eventually becomes a cautionary tale for the young foxes, who must learn strategies to survive in their more urban scene – a world where nighttime is the best time for exploration and play.

The magic of the night is particularly well captured in Aimee Lockwood’s outstanding illustrations, in which silhouettes are sometimes shown against the cool, blue-toned light of the moon. Lockwood’s depiction of the backhoe that drives the fox couple from their den, and of the cat who shares the garden in their new home, are also excellent. Twice, however, the author does the illustrator no favor by referring to the action as occurring “one day” instead of “one night,” although the action clearly is taking place in the dark.

Another issue is that the text-heavy content varies in font-size, reduced on some pages and magnified on others. With an illustrator this good, it would have been advisable to keep the font uniform, further break up text, and celebrate the story in more illustrated spreads. The book’s title, too, should use an upper case “f” on “foxes.”

Killeen, is at her best capturing sounds to illustrate action, an appropriate approach in a book featuring keen-eared foxes. Killeen writes of the “rumble and grumble” of the backhoe, “the weird wailings of sirens” and the “shouts and squeals from children at play.”

Even with some flaws, The Moonlight foxes is an appealing story to read aloud to young children. And the nighttime setting makes it a fine bedtime story.