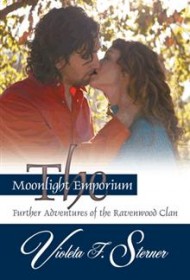 The Moonlight Emporium has a hint of the paranormal about it. A continuation of an earlier book, Violeta F. Sterner’s romance details the wedding of Kate and Ravenwood, who have been re-encountering each other here and there over 300 years but have finally decided to tie the knot. There’s creepy intrigue, steamy lovemaking and a dream wedding to attend. What’s not to like?

OK, a few minor quibbles. This book picks up five years after Kate “broke her head” heroically rescuing Ravenwood’s children in a blizzard. She’s only just now getting around to seeing a doctor, so exactly how bad a break was it? Immediately after the wedding, one of the children is severely beaten by Professor Gilbert, a character who is given no explanation or background. Ravenwood beats him in retaliation and the whole episode of his arrest and trial makes no sense as a four-page side trip after a wedding.

Also, there’s no explanation, at least in this volume, for the long lifespans.

So no, it’s not perfect. But Sterner knows her genre well, threading in well-written sex scenes and a tender moment when Ravenwood plays the fiddle at his wedding, showing the reader his character instead of just describing it. If this is part of a planned epic, let’s hope Sterner edits for clarity and for consistency in the omniscient narrator’s voice, which varies between objective third person and a more opinionated perspective.

With a few minor tweaks and a lot more pages, there’s nothing standing between her and a large, appreciative audience.