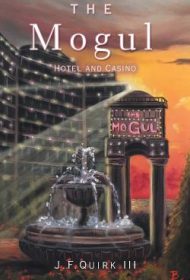 The intrigue that swirls around casinos and the people who dwell within can be a perfect backdrop for duplicity, crime and intrigue. This is what author J.F. Quirk III promises in his short novel, The Mogul: Hotel and Casino. Unfortunately, writing issues prevent the story from reaching its potential.

The book is oddly constructed with a jumble of run-on conversations between the many characters. Because the author fails to provide correct punctuation, it’s confusing to follow. Quirk relies heavily on large blocks of dialogue rather than conventional narrative, almost like a play. But rather than delivering meaningful dialogue to foreshadow a plot turn or provide character insight, here it’s simply mundane, with no payoff:

“Johnny said can I talk to you for a second Andy? Yes, what do you have on your mind, sir? Well, I saw Big Ron this morning and he didn’t look like his self. He looked a little sad, said Johnny. You think you could track him down and let me know where he is? I will keep my eyes open for him and let you know sir. You don’t have to call me sir Andy. I know that I don’t have too [sic] but as a veteran I kinda am just used to it I guess. I will call you on your cell if you want, Andy said, Ok…”

Quirk seems to have a mystery in mind in this disjointed storyline, but it never jells. The bright spot is a series of scenes revealing that a casino worker is a former special operations officer who is recruited by the FBI. The notion of a spy within the casino has tantalizing possibilities, but it’s never developed or explained.

The Mogul is apparently the first installment in a serial, as it abruptly concludes with “to be continued.” One hopes Quirk will tie up the many loose ends and explain why his long list of characters matter in future efforts.