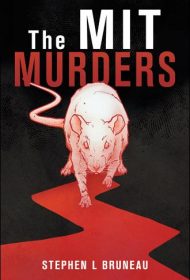 In this cat-and-mouse thriller, a graduate student lies for what she believes is the greater good—only to find that her actions have unintended consequences.

When Augusta Watkins is found brutally murdered in the elevator of her apartment building, chief homicide investigator Dimase Augustin of the Cambridge Police Department finds a horrific scene. The victim has been killed in an elevator, her eyes gouged out. Bloody words on the elevator wall read “Justice is Blind.” With barely time to process the death, Augustin receives word of another murder – this time, a young woman jogging in the Boston Common. Her sign reads, “Justice is Swift.”

Augustin soon finds that the seemingly unrelated victims are part of a five-woman book club. After a third brutal death, Augustin races to uncover the murderer, protect the remaining two women, and figure out why MIT graduate student and researcher Susan Pearce seems to be the real target of the savvy killer.

The MIT Murders is reminiscent of James Patterson’s novels: meticulous plotting and an exceptionally intelligent and violent killer. As with some of Patterson’s works, the writing is straightforward, with some clichéd and uninspired dialogue: “That’s just it!” Elizabeth cried. “I can’t get in touch with either one of them. It’s as if they’ve vanished off the face of the earth.” But, as with Patterson’s books, it all works anyway. The story speeds along, right down to a satisfying twist at the end.

In addition to the usual elements of a thriller, the story stands out because of an underlying—and of-the-moment—very 21st century dilemma. Both the killer and Susan have good reasons to subvert the truth to protect something he or she values. The killer may be psychotic, but Susan’s questionable actions hardly qualify her for saint of the year. It’s an interesting twist on the good-versus-evil moral universe of the average thriller—one that readers are sure to enjoy.