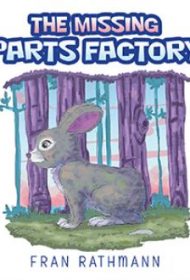 A rabbit with a missing tail finds the answer to his problem in The Missing Parts Factory, a children’s picture book by Fran Rathmann.

Born without a tail, rabbit Candy is regularly teased about it. When he sets out in search of a solution, he finds a building called “The Missing Parts Factory.” Inside, a man named Mr. Otto glues a cotton ball to Candy’s rear. Candy happily sets off, but he soon finds that his worried mother, who has been missing Candy, has organized a search party— and the animals who had teased him have joined the search to help.

While many kids can relate to a character being teased by others, the book suffers from mixed messaging. Early on, Candy’s mother encourages him to “be strong and accept things the way they are.” He finds this advice inadequate – hence, his search. While Candy’s striking out to find a solution might seem noble and independent-minded, it could also be interpreted as a surrender to peer pressure or a belief that his natural body isn’t good enough.

The book’s art is attractive, with the rabbits’ fur looking plush and textured. At times, however, the visuals don’t match the text. For example, when some squirrels and turtles are said to be laughing and giggling at Candy, the illustration shows them with downward-slanting eyebrows, seeming to indicate malice rather than mere insensitivity. Worse, when animals are described at the book’s end as cheering and clapping for Candy, many appear unhappy or angry.

The book aims to be inspirational, although its final message of “Pass it on, do a favor/ Help someone every day” emphasizes Mr. Otto’s assistance rather than Candy’s initiative in seeking a solution. The Missing Parts Factory will prove enjoyable to some readers, but its flaws hinder its potential.