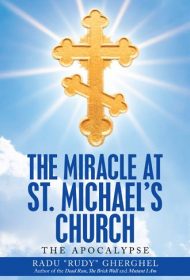 The brief story is told by a narrator watching events unfold. Hundreds of parishioners also witness the modern-day miracle on Easter Sunday, 2026 as an angel descends, filling the church with light and calling for people to repent, because “the time you waited for [seemingly Judgment Day] is near.” Most remarkably, when the angel departs, a cross at the front of the church is permanently lit up with no discernible power source.

In subsequent days, the faithful flock to St. Michael’s to pray; some are even healed. The outside world responds by sending investigative teams. The U.S. government tries to gain possession of the cross “for the good of all”; other groups offer money, and still others resort to violence.

The author effectively intertwines real events and places into his story. For example, St. Michael’s is a real church, and the COVID pandemic is part of the plot as forerunner to a worse virus purposely unleashed on the world by a nation intent on global control. The Illuminati play a small, rather forced, role.

The writing is plain, and the narrator sometimes drops textbook-like blocks of information into his story (“Construction of the new St. Michael’s Church began in 1924. After many delays, finally it was finished and Archbishop Adam solemnly dedicated the new church on Thanksgiving Day 1932…”). Dialogue can be equally wooden, particularly when a character is delivering background information (for example, when one character explains the 1993 Waco tragedy). Additionally, the size of the lit-up cross is never specified.

Still, the author skillfully builds suspense. And although the plot becomes grandiose, the topic of uniting Christians before a coming worldwide rapture requires such grandiosity.

Despite its flaws, this is a fresh take on how the upcoming rapture many Christians await could play out that may appeal to a conservative Christian audience.